Select here for a pdf version.

How does repentance work? Most think: first I become aware of my sins, and then I am sorry for them.  Then I name them and make amends. More or less. You have to do the best you can, and God will do the rest. That’s what repentance and forgiveness is about. According to the Roman Catholic system defined at Trent here is how it works: Under the supervision of the priest, first you are contrite, then you confess, and then you make satisfaction.

But what if we forget some sins? What about sins we are not aware of? When are we sorry enough? Do we see ourselves as we really are? Can we ever really make things right again? Here Luther is a first-rate example. He tried to confess all his sins and then repent and make it right. He realized, when he was brutally honest with himself, that he ended up either in spiritual pride or in spiritual despair. There was no way to catch up and get ahead. No way to do it right, no way to make it right.

Presupposed in all of this is that we can and want to know our sins and do something about them.  God’s grace provides everything we need, but first we have to repent. That is to say, there is something within us that can turn toward God, a divine spark or a “bent” toward God in our very nature.  (As in Augustine’s famous dictum: “The heart is restless ’til it finds its rest in thee.”)

When you come down to it, however, sin is rebellion. We never want to repent and never want to make it right. To be sure, people do change their lives. In God’s left-hand kingdom we do repent and make changes. But in his right-hand kingdom, before the Lord and the true burden of holiness, we end up either misled by the Evil One into spiritual pride, or, like Luther, unable to be dishonest with ourselves, we sink into spiritual despair. We may, of course, be aware of and even ashamed of being caught in our sins. But to change in our heart of hearts is not possible.

We remember Luther’s explanation to the Third Article of the Creed:

“I believe that by my own reason or strength I cannot believe in Jesus Christ, my Lord, or come to him. But the Holy Spirit has called me through the gospel, enlightened me with his gifts, and sanctified and preserved me in true faith.”

We may paraphrase this by stating: “I believe that by my own reason or strength I cannot repent…” and that the Holy Spirit is the one who brings me to repentance.

The same is true for faith. Faith can be analyzed psychologically, as James W. Fowler does in his book on the psychology of human development, but psychological faith has nothing to do with theological faith, which is based on what God does. As Joseph Burgess writes:

“Thus faith is a gift, purely and simply. All are in the same situation when it comes to faith, just as all are in the same situation with respect to sin. That means adult baptism is simply delayed infant baptism. Infant baptism admittedly cannot be shown with absolute certainty to have been church practice until the end of the second century, but the theological rationale was there from the beginning. This is the essential meaning of sin and grace.

“We must not allow ourselves to be trapped into making the validity of faith the decisive question. God breaks through to me by his words and actions, in spite of my sin and weakness. Though deaf, I hear; though blind, I see. Thank God my salvation does not depend on my feelings, my consciousness (whether I still believe if I am asleep, senile, mentally ill, or retarded), my level of psychological development (whether I still believe I believe or doubt I believe), the faith of the Church, or, finally, on me (in any way, shape, or form), lost and helpless as I am.”[2]

Repentance, like faith itself, is a gift of God. It does not depend on us, on how sincerely we repent, or what changes we make in our lives, or whether we make it all right.[3]

In the New Testament there is no pattern or sequence for repentance and salvation, such as call, repentance, conversion, adoption, justification, regeneration, sanctification, and glorification. In Romans 8:29-30, Paul writes:

Faith and repentance are not mentioned and everything is in the past tense.[4] This is because it is all God’s doing, and it is all really one act of God.

For example, note the curious sequence of sanctification before justification in 1 Cor 6:11: “You were washed, you were sanctified, you were justified in the name of the Lord Jesus Christ and in the spirit of our God.”

Thus in the theme verse for the Gospel of Mark (1:15): “The Kingdom of God is at hand, repent and believe the gospel,” it is important to realize that God delivers the kingdom just as he brings us to repentance and gives us faith. He does it by himself, without our help; it is finished (John 19:30).

We stand in awe at what God has done, is doing, and will do.

[1]   Alcoholics Anonymous (AA) is an example of a therapeutic use of repentance and belief in a higher power. AA is a very effective program, but it is not Christian repentance.

[3]   “Repentance” is not unique to Christianity but exists in other religions as well. How then is Christian repentance different? Is it because Christians repent in Jesus’ name? To be sure, we pray in Jesus’ name, but the name does not “work” like a magical formula. Rather, God elects us through the cross. As Luther says, the righteousness of faith is a purely passive righteousness. God does it. Thus Luther’s explanation to the Third Article of the Creed.

[4]   The Greek verb here is the aorist tense, which does not exist in English. It is not a simple past or a past participle. Rather it means “now and forever,” as in Ephesians 1:4: “… [H]e chose us in him before the foundation of the world….” 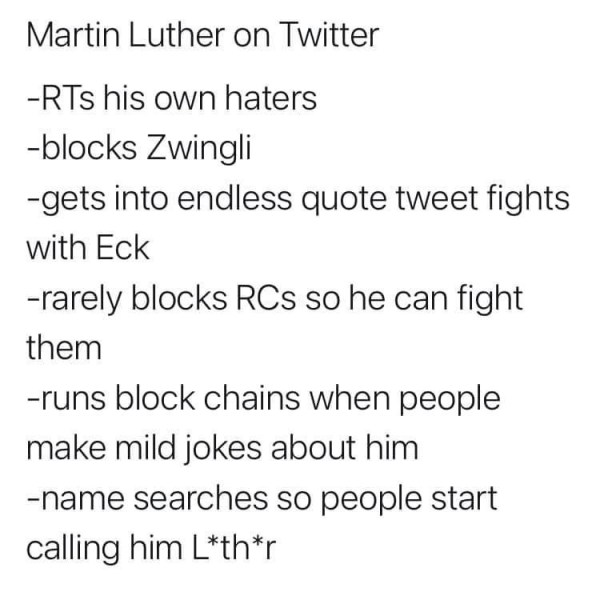