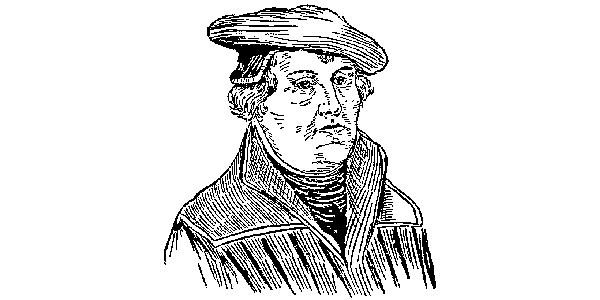 “Indeed, we would make new decalogues, as Paul does in all the epistles, and Peter, but above all Christ in the gospel” (LW 34:112).

Postscript to the Captivation of the Will. “The only way to overcome the problem of the hiddenness of God not preached is by God preached. But that will not happen by attempting to infer God’s will from the law” (LQ 19:1 [2005]78).

Christian Dogmatics. “The outcome of such confusion [distinctions between ceremonial and moral law] was, in general, that natural law became the arbiter. Natural law decides what is moral and what is not. But therewith the fate of the church’s understanding of law was sealed, as well as of its eschatological outlook. Natural law became the structural backbone of the theological system, displacing eschatology” (447).

“John Agricola rightly sensed that justification by faith could not simply be combined with the older idea of law as an eternal order, still evident in some of Philip Melanchthon’s theological constructions” (448).

“The gospel as the unconditional promise of the kingdom humanizes and naturalizes the law…The tendency is always to project the rule of law into God’s eternity and thus tyrannize people rather than care for them….The distinction between the rules is made both to give the rule of law its proper place and to protect the world from the tyranny of the religions which have become a substitute for eschatology…” (459).

Justice and Justification. “Law is to be used for political purposes, i.e., for taking care of people here on earth in as good, loving, and just manner as can be managed. Reason, i.e., critical investigation using the best available wisdom and analysis of the concrete human situation in given instances, is to be the arbiter in the political use of the law” (W&W 7 [1987] 27.

Lex semper accusat. “For faith in the end of the law leads to the view that its purpose is to take care of this world, not to prepare for the next. That means that we do not possess absolute, unchangeable laws. If the law no longer takes care of this world, it can and must be changed. As even Luther put it, we must write our own decalogue to fit the times” (AMRG: 49)

Law and Sexual Behavior. “But in cases of the civil use of law it is not legitimate to argue that one example of change justifies another. Each case has to be argued individually” (LQ Spring [1995] 9).J

“Our tradition has chosen to speak of a ‘natural law’ to characterize the structure by which evil is restrained and life ordered for the good of all. We do not believe there is a single heavenly code which religious people know better than others. ‘Natural law,’ through which God ordains order, is embodied in human codes – some better, some worse.”

“In the realm of the law, reason and not revelation is primary. God has not revealed any specific code for life.”

“In our deliberations, the wisdom of Scripture and the tradition cannot be cited as ‘God’s answer’ to the matter, but neither ought that wisdom be summarily dismissed as irrelevant or outdated.”