As bride and bridegroom exchange possessions in a marriage, so the sinner receives justification from Christ, and Christ takes over the Christian’s sins. Luther later found an image for the joyful exchange in Jacob’s ladder: Jacob’s dream has come true; Christ descends from Heaven, and the Christian ascends to be united with God.”

Staupitz, too, spoke of the joyful exchange whereby Christ takes over guilt, thus becoming “unjust and a sinner” Himself – a concept that immediately provoked pious indignation.’ But the conclusion Staupitz drew was different from Luther’s: liberated from the burden of sin, the faithful will now find perceptible peace. The new condition of righteousness can be experienced; it is a sweet foretaste of eternity.”‘

Luther, on the other hand, experienced the growing power of the Devil, who, challenged by the Gospel of the joyful exchange, directs his attacks at the faithful. The Devil cites Moses and his Ten Commandments against the “alien” righteousness of Christ; he breeds scruples, insists on good works, and relentlessly drives the conscience to assuage the wrath of a just God. The “joyful exchange” of which Luther speaks does not lead to the sweet experience described by Staupitz, for in the battle with the Devil there is no rest, no peace, and no visible success.

Through Christ’s exchange the faithful Christian is “simultaneously sinner and just” – “simul peccator et iustus.” “He is a sinner because self-love and inner resistance against God remain unconquered; he is just because he has been given the righteousness of Christ, which is valid before God. Luther found the language and the model for a graphic description of this state of dual existence in Tauler and the Theologia Germanica. The soul is taut with groaning over the burdens and sins of creation; it is beyond earthly cares when it experiences the joyous union with God. In mysticism groaning and rapture characterize the beginning and the end of the road from painful separation from the world to joyous union. For Luther “groaning” and “rapture” are experiential terms for the simultaneity of peace and misery: peace is interspersed with the cruel reality of the Devil’s power – “simul gemitus et raptus.”

Luther’s encounter with Augustinian theology through Staupitz and with mystical experience through Tauler encouraged and confirmed him on his way to a new piety and a new way of thinking. Both of these central experiences, tribulation and mystical ascent, diabolical remoteness from God and joyous union with God, are no longer typical of the spiritually ill and the spiritual elite, two marginal Christian groups. All parts of the true Church suffer spiritual distress and are at the same time united with God. 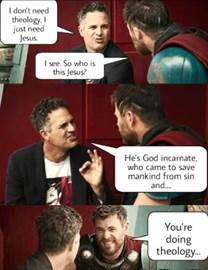